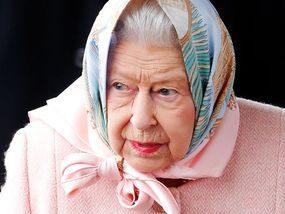 THE QUEEN has been caught up in claims she lobbied the Government in order to prevent the extent of her private fortune from being made public. One royal commentator has branded the claims an “anti-monarchist conspiracy theory” and argued there is no public interest in the Queen’s private wealth being revealed.

UFO enthusiasts believe they have hit the jackpot when it comes to the search for ...
By
4 days ago

AN ALIEN base has supposedly been found on the surface of the Moon by conspiracy ...
By
6 days ago

MEGHAN MARKLE’s torrid of online abuse that she has been subject to has left one ...
By
June 12, 2021

ALIEN hunters believe they have spotted signs of extraterrestrial activity on the Moon after discovering ...
By
June 7, 2021