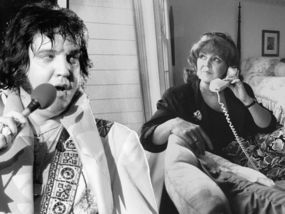 ELVIS PRESLEY died in 1977, leaving his fans, friends, and family devastated – but many people think the King faked his death, and is still living to this day. And during a TV special in 1991, a woman claimed she received a phone call from the late singer to discuss Lisa Marie Presley.

UFO enthusiasts believe they have hit the jackpot when it comes to the search for ...
By
4 days ago

AN ALIEN base has supposedly been found on the surface of the Moon by conspiracy ...
By
6 days ago

MEGHAN MARKLE’s torrid of online abuse that she has been subject to has left one ...
By
June 12, 2021

ALIEN hunters believe they have spotted signs of extraterrestrial activity on the Moon after discovering ...
By
June 7, 2021